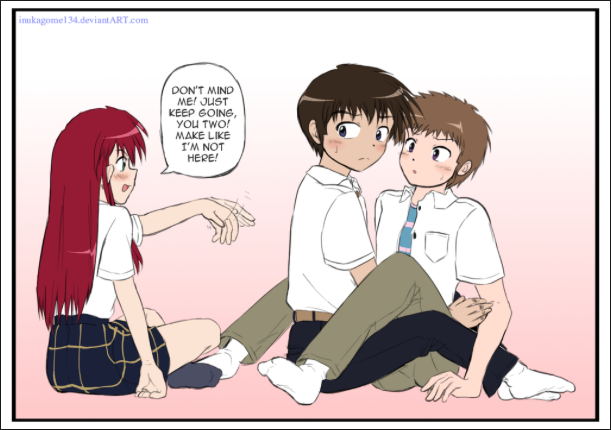 ‘Boys Love’ manga presents gay men for the pleasure of straight women – so why does it represent both so badly?

[Contains spoilers for ‘Ten Count’ and ‘Raising a Bat’.]

In hit anime series, Ouran High School Host Club, twin brothers Kaoru and Hikari always make sure to treat their female guests at the titular club to quite a show of “brotherly love”.

For viewers popping their proverbial anime cherry, these scenes must be a bit of a culture shock. For those more familiar, it translates as both serving and gently mocking the shounen-ai (‘boys love’ or BL) genre; fulfilling its target audience’s expectations whilst cheekily representing them as easily manipulated girls with nothing better to do than fawn over bishounen (‘beautiful men’).

As a life-long otaku with a soft spot for said beautiful fictional men, I can’t say that I don’t see a little of myself in the squealing guests of the Host Club and niether do I see anything wrong with it. The level of eye-rolling that follows the success of things like Magic Mike or Fifty Shades of Grey or any other cultural product that caters unabashedly to female sexuality is getting pretty tedious.

I mean, Free! doesn’t exactly owe it’s success to the big cross-section of anime and professional swimming fans does it? Source: Giphy.

At the same time, I also know that BL is a genre unfortunately beset with complicated problems in the way it represents gender and sexuality.

The fact that the majority of BL stories are created and read by women binds the genre in both positive and negative baggage. On the negative side, far too many stories that occupy this particular genre of storytelling promote unhealthy and harmfully unrealistic depictions of gay men through a female heteronormative gaze. This is especially true of ‘yaoi’ stories, a sub-genre of shounen-ai that features more sexually explicit content, and one in which gay men are even more in danger of being objectified and fetishized by this gaze.

A page from popular BL manga, Kuroneko Kareshi no Aishikata, by Ayane Ukyou.

There’s also, I’ve noticed, a perpetual conflict between BL character’s sexuality being unfairly dominant in defining their personality, yet strangely absent in their lifestyles. Even the out and proud BL characters who are doggedly obsessive in their romantic pursuit of other men hardly ever self-define – verbally or otherwise – their own sexual preference by name. More to the point, I have yet to see one of these characters to go a gay club or Pride parade. Instead, they always seem totally isolated from their own community – a community that is notoriously familial, IRL. In these tiny, pocket universes dedicated to man-on-man action, the ‘G’ word seems either be taboo or redundant.

If we go with the latter description, you could argue there’s something progressive in enjoying romance stories without ‘seeing’ gender. As Lin-Manuel Miranda poetically put it: “Love is love is love is love,” after all. But, when we’re talking about BL, we know that’s simply not the case. It’s right there in the name after all: boys love. And since heterosexual love stories are still a dime a dozen, there’s a kind of voyeur curiosity for the straight consumer attached to ones told from an LGBTQ perspective.

I wouldn’t ever use the word ‘regular’ to distinguish between heterosexual and homosexual relationships, but the right sentiment is there all the same. Source: Pinterest.

BL certainly contains some questionable depictions of gay men, but perhaps equally troubling is its representation – or often lack there of – women. This is also particularly strange for a genre that is so female-focussed from inception to readership. The literary world is still dominated by men and the comic book industry is no exception. For this reason alone, the space carved out by women in the Japanese market for shojo and shounen-ai decades ago was downright pioneering. Just read this extract from Mark MacWilliams’, Japanese Visual Culture: Explorations in the World of Manga and Anime, for further proof:

“The production of Japanese comics has always revolved around men – male artists, editors, and publishers – and they reacted to yaoi comics with revulsion, which caused a sensation. The mass media criticised such stories as decadent and degenerate, using hyperbole to characterise these kinds of stories as a “violation” of manga. However, this issue of homosexuality also stimulated the industry creatively. Today, one can find many successful female artists and editors in Japan. The continuing popularity of yaoi comics also suggested that Japanese women are not shocked by gay themes.”

Knowing this revolutionary history of the genre, it seems surprisingly counter-intuitive that so many BL stories are so misogynistic in their tone and representation of women. Female creators too often either vastly underrepresent their own gender, or cast them as antagonistic forces standing in the way of ‘true’ male love. The latter of which I found to be a particularly troubling aspect while reading Takari Rihito’s Ten Count manga – one of the highest selling BL manga in Japan since 2014.

Cover art from volumes 1& 2 of Ten Count by Takari Rihito.

Ten Count could best be described as the yaoi market’s version of Fifty Shades of Grey, which would make shy and inexperienced protagonist ‘Shirotani Tadaomi’ [pictured right, above] its ‘Anastasia Steele’. Shirotani has been plagued by misophobia (a psychological fear of being contaminated by dirt) for almost his entire life, which also inadvertently suppressed the truth of his own sexuality. Suppressed that is, until he meets a tall, dark and handsome doctor named Kurose [pictured left, above], who just happens to specialise in treating psychosomatic illnesses, and vows to cure Shirotani.

So far so yaoi, until it is revealed through flashback that the root of all Shirotani’s ails was… guess what? A woman! A woman by the name of Ueda, who – when Shirotani was a little boy – drove a wedge between him and his father (her school professor) by pursuing a sexual relationship with him. On one particularly traumatising occasion, Ueda tricks Shirotani into hiding in a closet while she has sex with his father. On the cusp of puberty, Shirotani feels confusingly aroused and tries to ‘relieve’ himself, which is the exact moment that Ueda pretends to discover him:

Shamed by Ueda, Shirotani desperately washes himself over and over again, unable to feel properly ‘clean’ after what happened. Subliminally, he starts to conflate arousal with dirtiness, becoming obsessively paranoid of any foreign contact from the outside world – especially human.

Equally troubling later on is Kurose’s treatment of Ueda in the present day, when – upon a chance encounter with him and Shirotani – Ueda antagonises Shirotani into storming out of the trio’s lunch date, and then tries to fruitlessly hit on Kurose. Kurose’s reaction to this unwanted attention is, um, well see for yourself:

Obviously Ueda is not a supposed to be a warm, sympathetic character in the slightest, and every melodrama needs its moustache-twirling villain… but is the slut-shaming really necessary? And why does the only female character in the entire story have to be characterised as a man-eating sociopath? Considering that gay and female culture often go together like PB and J, this hostile ‘battle of the sexes’ trope is yet another negative aspect of the genre that is weirdly inconsistent with reality.

Look, the truth is: I criticise because I care. Ten Count is a deliciously guilty pleasure to read, which is why this blemish on its otherwise stellar quality riled me so much. As a feminist and a fangirl, I want the media I love to do a better job at serving its fans, which is why I’m going to end on a more positive note.

Raising A Bat (Bagjwi Sayug) is a Korean webcomic (or ‘manhwa’) that puts a supernatural twist on the problematic ‘seme‘/’uke‘ (dominant/submissive) relationship dynamic that most BL falls into. ‘Park Min Gyeom’ [pictured left, below] suffers from a rare blood disease called hemochromatosis, meaning his blood absorbs too much iron forcing him to regularly donate to keep healthy. This condition makes him the perfect source of food for his classmate, ‘Kim Chun Sam’ [pictured right, below] – a half-vampire. I guess you could call it the BL answer to Twilight. Interestingly, mangaka (creator) “Jade” refuses to let their dynamic fall into the standard ‘prey/predator’ one that you’d expect. Human Min Gyeom is in fact the one who calls the shots, deciding when and where vampire Chun Sam is allowed to feed off him, while Chun Sam – the burlier of the pair – falls into a more submissive role, visually evidenced by the cover art: 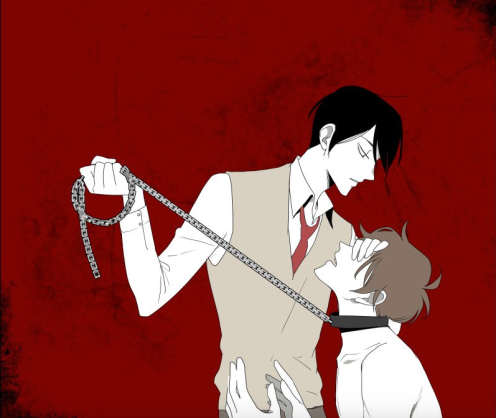 Cover art for Raising a Bat by “Jade”.

Abused and abandoned by his father, Min Gyeom has had to grow up far too quickly with his younger half-sister being his only source of genuine affection. He’s guarded, plucky and full of self-loathing. Chun Sam, on the other hand, was born to a rich and loving vampire/human family and babied by a watchful mother (who also served as his food source [insert Freudian analysis here]). He’s sensitive, naïve and painfully shy. Things get even more complicated when the two start to develop romantic feelings for each other, with their emotional baggage blocking them from being able to healthily express this.

Not only does Raising a Bat manage to subvert the troubling seme/uke trope in an unexpected way, it features a cast of positively represented women in supporting roles, and even a self-defining bisexual male character (Jung Won Hyung) whom Min Gyeom pursues a dysfunctional relationship with. Even better, when Jung Won betrays Min Gyeom’s trust by ‘forgetting’ to tell him he has a girlfriend on the side, “Jade” is clear in placing the blame squarely on Jung Won rather than make an enemy out of his girlfriend. 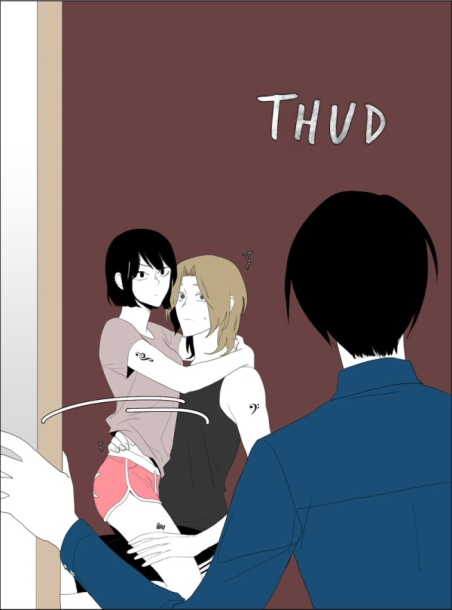 The drama all comes to a head when – homeless, rejected and hopelessly alone – Min Gyeom considers ending his life. Self-harm and suicide are also reoccurring themes in BL stories, often in the damaging context of glamourising abusive relationships. Yet, the strong writing and starkly minimalistic artwork of Raising a Bat make this moment one of real grit rather than cheap shock value. Especially when you take into account that suicide attempts are 4-6 times higher in LGBTQ youth than they are in straight youth, and 8 times higher in LGBTQ youth who come from “rejecting” families – as Min Gyeom does.

BL can be smutty, endearing, funny, poignant, trashy and fun. What it shouldn’t be is offensive, harmful or insulting to its subject matter or audience. Raising a Bat goes some way in raising the bar on what we should expect from BL, but there’s still a lot more ground to cover yet.

13 thoughts on “Does ‘Boys Love/Yaoi’ Manga Have A Gender And Sexuality Problem?”