This article is part of a series. You can read the introduction here.

First published on the Fanny Pack blog on 12th September 2015.

Taking inspiration from a mix of British history and folklore, Disney’s Robin Hood (1973) reimagines the classic tale of the notorious morally-minded outlaw who robs from the rich to give to the poor during the reign of Prince John (1199 – 1216), set in – yes, you’ve guessed it – Nottingham. In this version, Disney chose to reinterpret the entire Kingdom as anthropomorphic animals: Robin Hood and Maid Marian are foxes; Little John is a bear; Friar Tuck is a badger/mole (I honestly couldn’t work out which one…); Prince John and King Richard are Lions; the Sheriff of Nottingham is a wolf; Sir Hiss (aide to Prince John is a snake); Lady Kluck (Maid Marian’s Lady in Waiting) is a hen; and other characters include dogs, rabbits, mice, and even a tortoise.

This version – filled with a strange mixed cast of both British and American voice talent – follows Robin and Little John on various escapades to recover the money that Prince John has heavily taxing his subjects for – leaving most of them destitute. (In reality, this was to fund the Prince’s war with France, but the film chooses to simply chalk it up to greed alone.) However, the thread that weaves everything together is actually the reuniting of Robin with his childhood sweetheart, Maid Marian. After returning to her uncle’s (Prince John’s) castle in Nottingham, both she and Robin long to see each other. Prince John – eager to capture the outlaw who continually makes a mockery of him – stages an archery tournament with a kiss from Marian as the Grand Prize, knowing that Robin wouldn’t be able to resist showing off his skills.

Robin enters in disguise and is of course victorious; at which point the Prince’s guards jump on him. Robin manages to escape execution thanks to Little John’s help, and elopes with Marian to Sherwood Forest. Furious once again, Prince John captures Friar Tuck – a loyal ally of Robin’s – and announces his public execution to lure Robin out again.

There are 6 female characters with speaking parts: 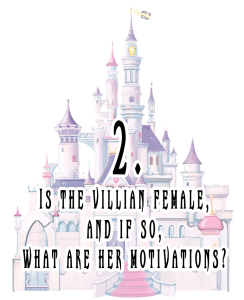 As all of the characters are animals, the animators sometimes felt the needs to make their genders unmistakeable by exaggerating some elements of their design. The little girl rabbit, for example, is flagged out as a girl by a cute dress, long eye lashes, and a massive pink bow (despite having no hair).

I guess her ears were getting in her eyes..?

Despite these cosmetic issues, I actually really enjoyed the tight bond that Maid Marian and Lady Kluck shared. Maid Marian is a classic – if not the classic – ‘damsel in distress’ archetype, and as such could have easily been portrayed as little more than just another object to steal from Prince John for Robin’s trophy collection in this version. However, for the first quarter of the film we see her only interacting with Lady Kluck and a little gaggle of children from Nottingham who stumble into the castle gardens to retrieve an arrow they accidentally shot over the walls.

As the children sneak through the bushes – terrified of running into the short-tempered Prince John – we hear whoops of laughter and shouts from the two ladies, until we see what they’re doing: playing badminton together. Later on when they are alone in Marian’s chambers, they gossip and giggle together about her romance with Robin, and Klucky assures her – as a good friend would – that “absence makes the heart grow fonder.” Although Robin does unfortunately occupy the majority of their conversations, I still found it pleasantly surprisingly that the film would take so much time to build up Marian’s relationship with another female character, especially one as relatively minor as Klucky. It leant Marian’s character a little more weight and independence; and Klucky – voluptuous, eccentric, feisty, and inexplicably Scottish – is a very easy character to fall in love with.

The plot is driven mainly by Prince John as he devises most of the major events in the story, such as the archery tournament and Friar Tuck’s execution. Moreover, even though Robin Hood is the titular character, it’s Prince John’s constantly unreasonable tax escalations that fuel his escapades. None of the female characters significantly contribute to the driving of the plot. 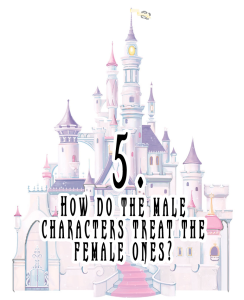 Robin and Little John seem to really love playing dress-up in this film. Less hardened bandits than happy-go-lucky conmen, the first we see of them in ‘action’ is interestingly them scampering through Sherwood forest pulling on various items of women’s clothing. Disguised as fortune tellers, they intercept Prince John’s carriage, knowing that he would never suspect women to rob him: “Female bandits? Poppycock. Whatever next!”

Neither Robin nor Little John seem even vaguely embarrassed or uncomfortable playing up to their gender-bended disguises – Robin comically modulates his voice as he pretends to see the Prince’s fortune in his looking glass; whilst Little John even sashays around flirtatiously teasing the guards outside. 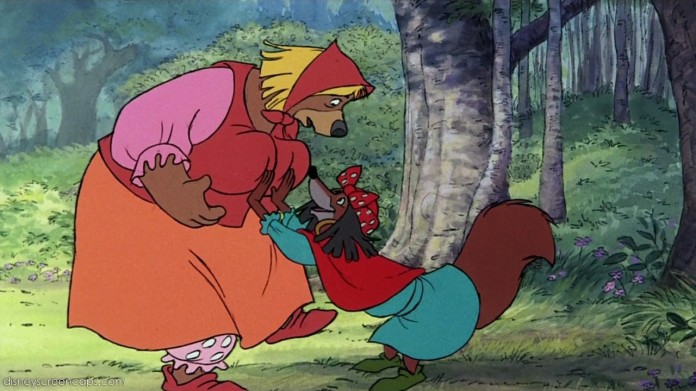 Possibly one of the strangest Disney screen caps ever.

Even domestically, the pair seem no strangers to more ‘feminine’ pursuits. John wears a frilly apron as he hangs washing out to dry on a line whilst Robin absent-mindedly stirs a pot of stew, dreamily thinking about Maid Marian. The stew starts to boil over, and Little John scolds him as he tries to salvage their dinner. These Disney bachelors seem a lot more maturely developed than the dwarves of Snow White who lived in squalor for fear of taking up ‘womanly’ chores. The tone, however is still frustratingly unclear: Are Robin and Little John progressively comfortable enough in their masculinity that they can easily affect traditionally female activities? Or are these scenes – complete with emasculating filly aprons and fake breasts – played for laughs?

Something more troubling though is Prince John’s character. Other than the decimation of the working class, his villainous quirk is that he is a “mummy’s boy”. Clingy, babyish, squeaky-voiced, and easily wound-up, he wails and sucks his thumb every time his late mother is mentioned, which he is mocked for, of course. He is the complete opposite of his brother Richard “Lionheart”, who we see later as a large, strong, and deep-voiced character – and well-loved by his people.

The oppositional twinning of Prince John with weakness and King Richard with strength sheds John’s close bond with his mother in a negative light as it reinforces the negative stereotype of boys’ who identify more with the mothers as being “feminised”, and therefore weak.

Prince John curls up with his riches.

In terms of the physical treatment of female characters by the males ones, the story seems mainly predicated on Marian and Robin’s romance, and as I mentioned earlier – Marian is by no means completely sidelined. As she and Robin make their escape from his capture and near-execution at the archery tournament, she does her best to fight alongside rather than hinder him. I’m not saying she’s a feminist icon by any stretch of the imagination, but Disney could have done a lot worse by her. Klucky, of course, is the stand-out performer in this scene:

Although Marian is not technically a Princess, her familial status as King Richard and Prince John’s niece, coupled with her being the object of the heroes’ affections puts her in the ‘might as well be’ category.

Aside from performing her duties at the archery tournament and generally living the lifestyle of a Princess, Marain’s main function in the story is to abandon these duties to elope with Robin. And although he is absolved of his crimes once King Richard takes back the throne at the end, she is still the most consciously rebellious Princess we have seen so far.

As much as I wanted to give this film a positive stamp of approval, there were certain negative factors I couldn’t let slide:

But, there were enough positive elements in the film to balance it out to a neutral classification:

Next up in the “Wicked Wiles” series: The Little Mermaid!