The Sacred Blacksmith or Seiken no Burakkusumisu is a fantastical story about knights, demons, medieval melodrama, magical swords, and reincarnation. At its core, however, it is essentially a story about a young woman asserting herself in a man’s world. In light of this it might be surprising to learn that the manga’s key demographic in Japan is the ‘Seinen’ audience – young to middle-aged men. Seinen stories are primarily characterised by soft-core sexual content and a female protagonist, but rather than rely solely on the usual fan service to satisfy male readers (panty shots, accidental nudity, nosebleeds, etc.) Sacred Blacksmith uses its genre trappings to instead highlight the causes and consequences of sexual violence with chilling realism, and handles it better than most live-action representations I’ve seen.

The Sacred Blacksmith began life as light novel series by Isao Miura with illustrations by Luna. The manga adaptation by Kotaro Yamada has been serialised in Monthly Comic Book Alive since 2009, and the (criminally short) 12-episode anime from Manglobe also aired in 2009. It’s hero is Cecily Campbell, a young woman who dreams of becoming a great knight like her Father. The problem is… Cecily doesn’t have a clue how to be a knight. In fact, she’s pretty useless at it. That is, until she teams up with Aria – a formidable spiritual sword who can take the form of a human – and Luke Ainsworth, a grumpy and isolated master Blacksmith who is attempting to forge a sword powerful enough to take out the evil presence that plagues the medieval world they live in. Aria quickly becomes Cecily’s ally and best friend, but Luke takes a lot more convincing. This is not because Luke has any prejudice against women (evidenced by his female assistant, Lisa) but simply because he finds Cecily’s incompetence really annoying.

Cecily getting on Luke’s last nerve.

Cecily, however, is unrelentingly ambitious, and slowly manages to become better and better at wielding Aria, and far more confident in battle. Luke finds that as their paths continuously cross, and Lisa and Aria conspire to push the two together, he begins to see past his initial impression of Cecily as a bumbling idiot and instead as a valuable ally and equal. These feelings predictably intensify into more romantic ones, but as Luke seems unsure if Cecily returns these feelings, he remains at a respectful distance from her… for now, anyway. 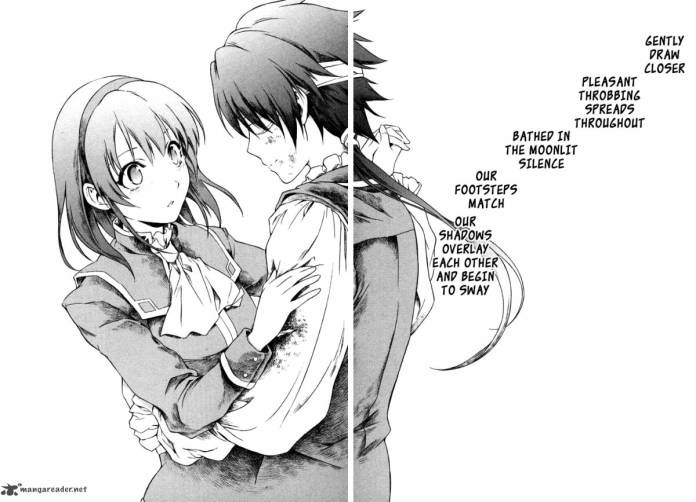 Cecily and Luke’s tentative and courteous relationship throughout the story is put into stark contrast with Cecily’s encounters with the villain of the story – Siegfried. Siegfried is your standard ‘insert-villain-here’ kind of villain: power-hungry, ruthless, and very, very creepy. This creepiness doesn’t take long to become predatory, culminating in one of the most shocking moments I’ve ever come across in my years of reading comics and manga.

It comes after Cecily manages to claim a significant victory over Siegfried, and he – humiliated – physically and sexually assaults her when she is alone and off-guard. His intention is to not only humiliate her in the way she did him, but to demonstrate both his power over her as an enemy and, more importantly, as a man over a woman. He doesn’t even need to actually carry out the ‘act’ fully because the implication is enough, and the implication is that it would certainly not be a sexual act rooted in lust, but a violent one rooted in sadism. The ordeal is quite honestly extremely difficult to read – as you would expect it to be – but perhaps equally heart breaking is seeing the effect it has on Cecily, who is utterly psychologically destroyed by it.

Cecily in turmoil after the assault.

This internal collapse is physically represented – and powerfully visualised – by Cecily shutting herself away in bed at home, curled up under the covers with the curtains drawn, closed off to all of her friends and family. Aria tries to console her, but gets nowhere. Cecily seems to suffer in silence for many painful weeks. It is unclear if Siegfried’s actions are unique to his cruel character, or symptomatic of a larger culture of sexual violence in that world, but either way, the effect on Cecily would be the same. In a manga that had been fairly sweet natured up until this point, the gritty brutality of this arc was rendered all the more shocking to me, but I was also impressed at the balance of realism, brutality, and delicacy that Yomada conveyed through art and text, and all the more endeared to Cecily. I was reminded of a scene in the film G.I Jane (1997) which told the story of Jordan O’Neil – the first woman to go through a male-exclusive Navy Seal training programme, the toughest in the world. In the scene, the harsh reality of being prisoners of war is demonstrated to the new recruits, and to their horror, Master Chief Urgayle graphically simulates raping O’Neil to coldly remind them that sexual abuse is used as torture in war. Broadly speaking, he is also reminding O’Neil that she really is a woman in a man’s world, and could be taken advantage of in ways that her male peers probably wouldn’t. The only difference between G.I Jane and Sacred Blacksmith is that O’Neil’s abuse was simulated, but Cecily’s was all too real. 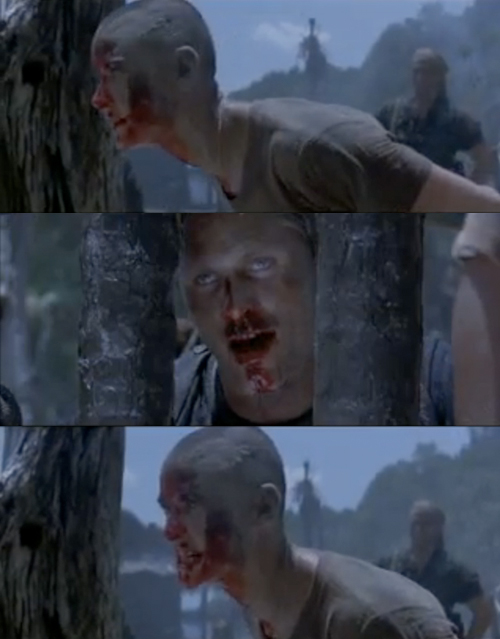 G.I Jane – the cold reality for women on the battlefield?

My expectation in Sacred Blacksmith was that Cecily would eventually confide in Luke leaving him to enact revenge on Siegfried as the resident valiant ‘Prince Charming’, but I was glad when this expectation turned out to be completely wrong. Instead – as you would hope from a self-motivated woman of action – Cecily manages to not only come to terms with the ordeal, but faces down Siegfried again with Aria in hand. Luke does aid her in doing this and there is an implication that he has some idea of what may have happened, but I don’t think this detracts from the significance of Cecily standing up to her attacker and finding strength as a survivor rather than continue to feel defeated as a victim. In fact, when Luke steps in to confront Siegfried alongside Cecily, he does so not as Cecily’s protector or superior, but as her friend and ally outraged on her behalf.

Luke has had enough of this shit.

The ‘woman in a man’s world’ trope maybe a well worn one, as is the ‘clumsy girl who learns strength through fighting’ one. And although Sacred Blacksmith doesn’t exactly reinvent the wheel, it is ultimately Cecily Campbell’s inner strength that pulls her through one of the toughest ordeals a woman can face, and handled with the appropriate mix of shock, brutality, and sensitivity through the beautifully drawn art. And don’t forget – this is all in a story aimed at young men.

By night, Hannah is a geeky feminist blogger, but by day she is a freelance artist who specialises in unconventional and unique illustrations. Check out her website here to see her portfolio.